When Fate knocked on Flaminio’s door, he was ready to answer its call. Kost Castle was the contested inheritance left to him by his grandmother’s brother, Eugen Wratislav Netolizky von Mitrovic, who died childless in 1867. His tenacity, diplomatic skills and his very able lawyer, Johann von Limbeck, helped him overcome all obstacles. The battle lasted 5 years but Flaminio travelled tirelessly between Tuscany, Vienna, Prague and other important cities until he gained possession of the Kost estate. 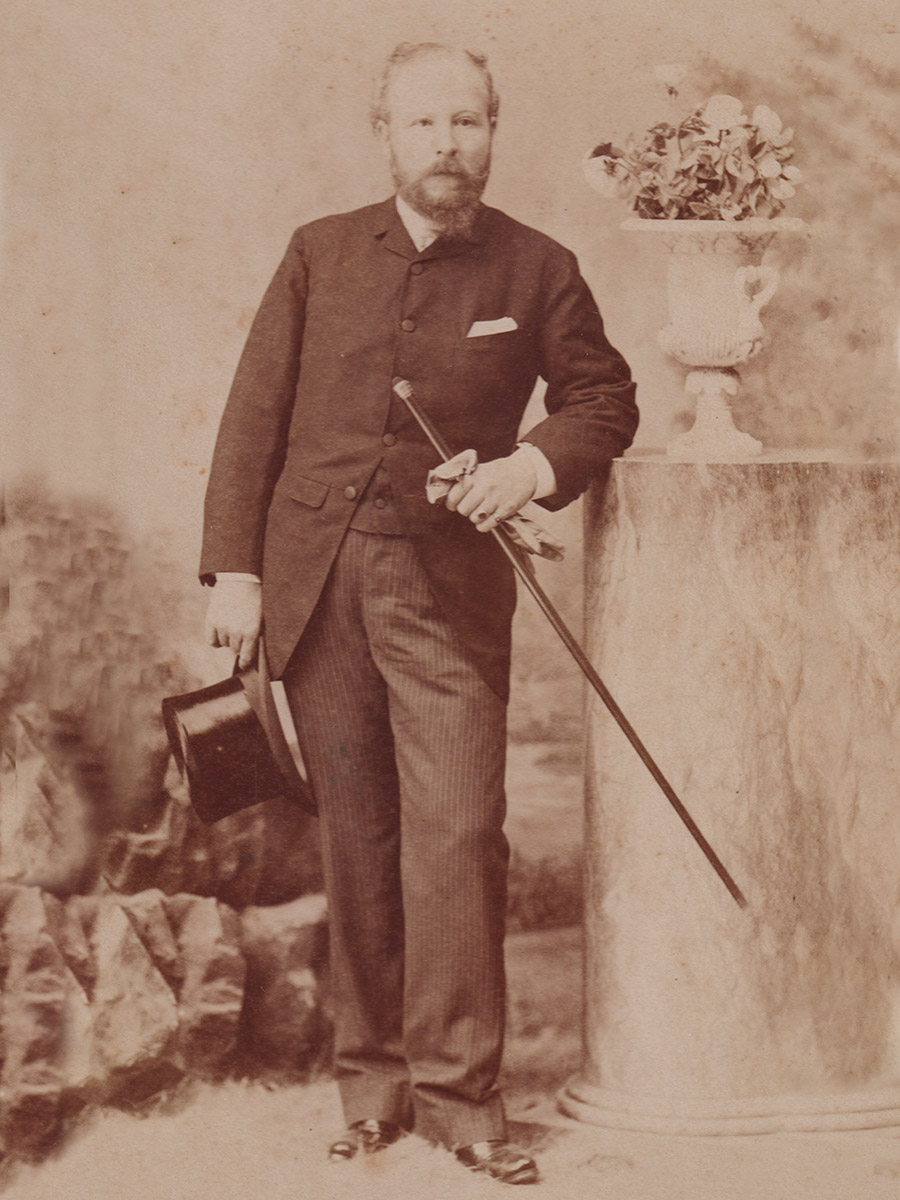 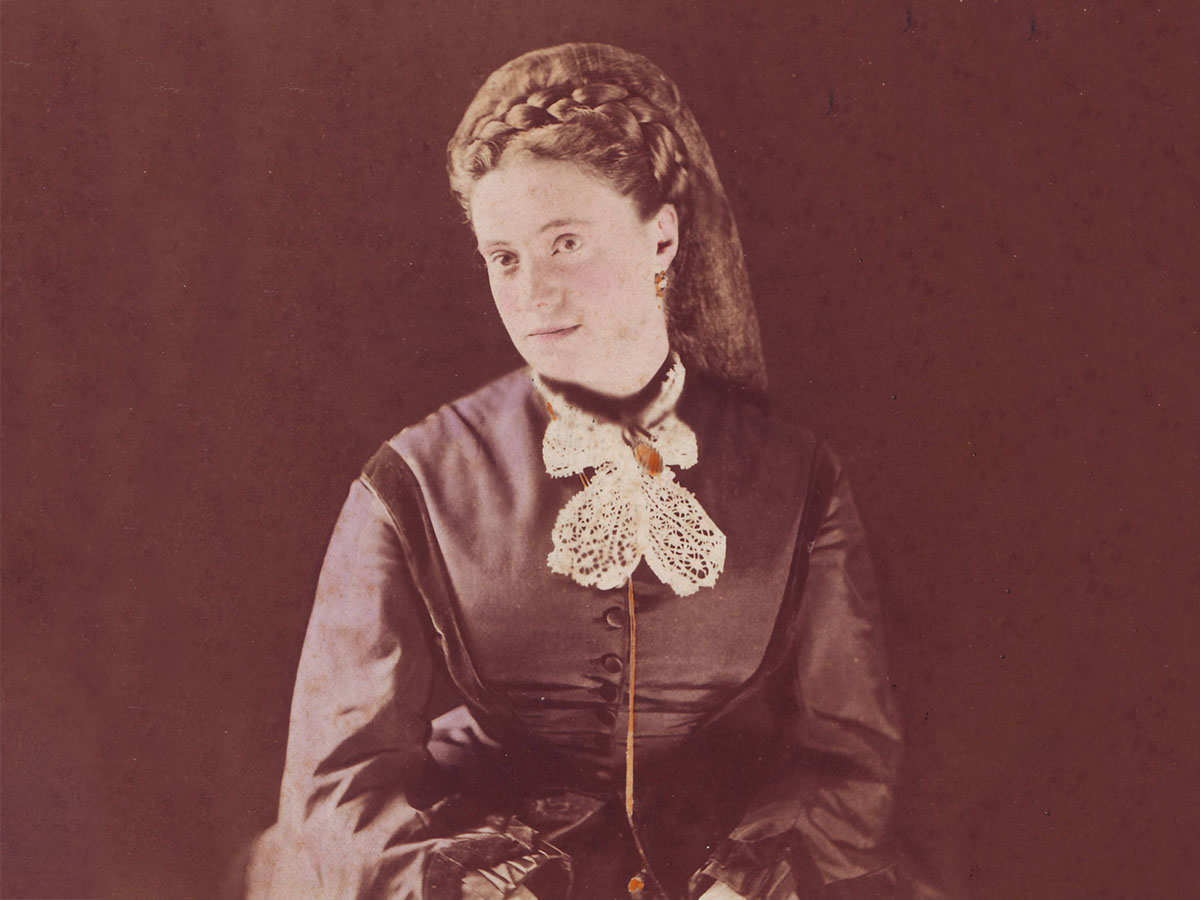 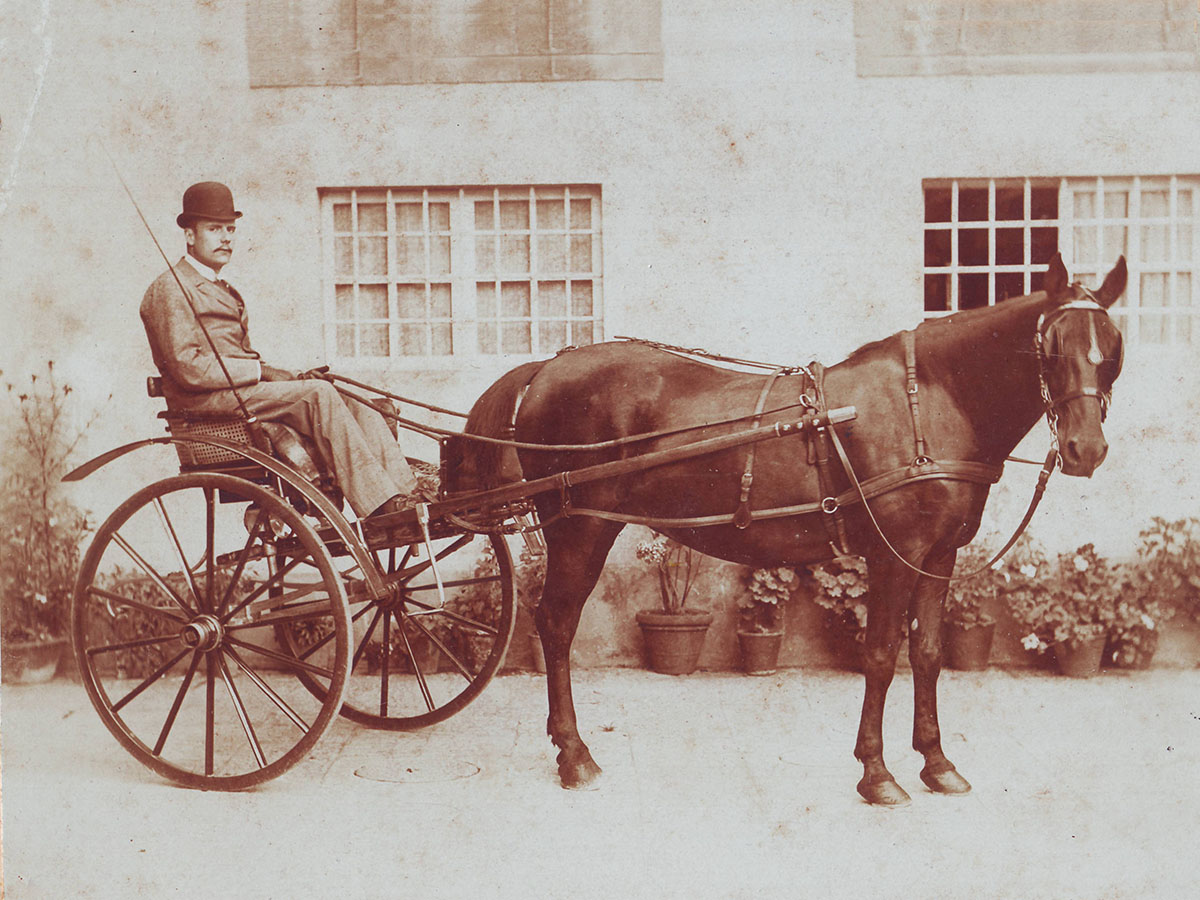 The only male child of Giovanni Saladino dal Borgo and Eleonora Pozzo di Borgo, Flaminio was born in 1837 in Pisa, in the Grand-duchy of Tuscany. His mother and sister died of typhus in 1849, leaving his father to raise him after the age of 12. He was a lively and capricious child.

After graduating University in Natural Sciences, he married Marianna Papanti Pelletier when he was 22 and had two sons, Giovanni Saladino, (1858) and Pio Paolo (1869). After his father died in 1861, Flaminio took care of his business with great confidence in his abilities and was a landowner who looked after his various properties in Tuscany very well.

He was also far-sighted. As early as 1860, he asked Count Eugen Wratislav to recommend a lawyer who could represent him in Prague the day the succession for the Kost estate opened. The Count’s handwritten card is on display . He suggested Frieherr Johann Von Limbeck “pour l’Affaire du Majorat”. Flaminio gave Limbeck a general power of attorney which Limbeck presented to the Court in Prague when Count Wratislav died in 1867.

From 1867-1872 Flaminio sustained a long court battle for the possession of Kost. He travelled tirelessly between the courts advocating his cause and his tenacious character combined with Dr. Limbeck’s legal expertise helped him finally gain possession of Kost on March 20th, 1872.

On the 22nd of December 1873 he received permission from the Emperor to join the names and coats of arms of the dal Borgo and Netolitzky families; he received the diploma on the 20th of September, 1874. On August 1st, 1868- Flaminio left Prague to visit Kost for the first time. He wrote his impressions of the castle in the letter dated August 8th. 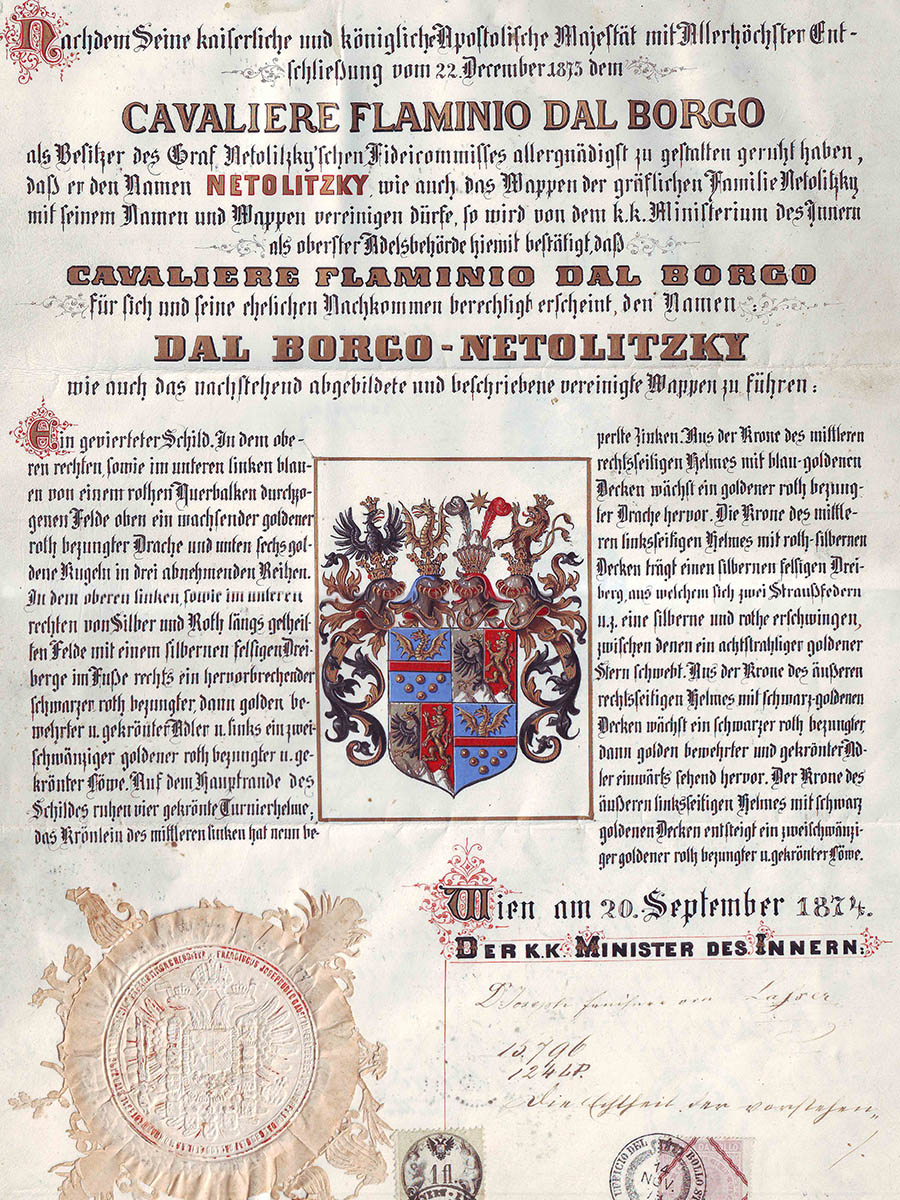 Imperial charter from 1874 documenting the union of the families

Flaminio continued to manage his properties in Bohemia until 1892, when he fell ill and gave Giovanni Saladino, his eldest son, a full power of attorney.
In 1894, he died in Italy at the age of 57 and is buried in the family chapel in Pugnano. On his first visit to Kost, he remarked that the castle was in a “ruinous” condition and that it would take a lot of money to restore it to a good condition.

Flaminio lived in the Vlčípole castle, which was fully furnished, and he was very often present in Kost, traveling between Italy and Bohemia, as evidenced by his letters. Later, his children went to visit him and followed him to Bohemia on business when they were older.

Flaminio’s attachment to Kost is shown in his holograph will of 1883 where he wrote: “When my death occurs, wherever it may happen, I wish to be transported and buried on the outer wall of the Church of Vlčipole in the garden in front of the entrance door to the Castle on the side …”

Subsequently, he wrote that he wanted to be buried in the woods of Kost if he died in Bohemia, and his son Pio Paolo wrote the same in his own will.
In Kost, he madea drawing of how he wanted to modify and restore the castle and then carried out some restorations. The improvements of the brewery began around the years 1873-74.